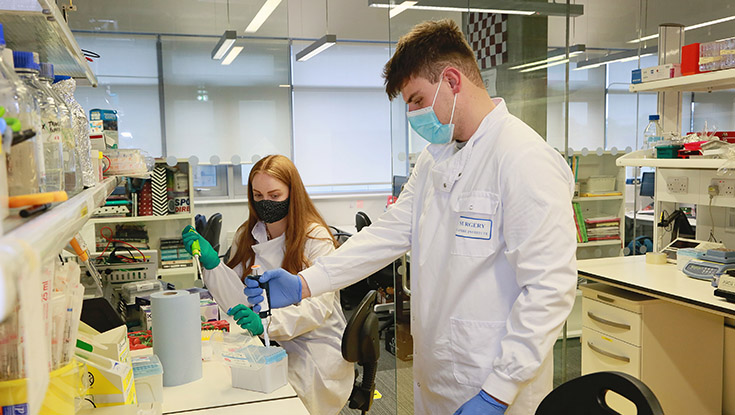 Dr Matthew Davey and colleague in University of Galway’s College of Medicine, Nursing and Health Sciences as part of research into biomarkers, known as microRNAs, which can help predict breast cancer recurrence in patients

Researchers at University of Galway have determined that biomarkers known as microRNAs can help predict which patients with breast cancer are likely to face a recurrence of the disease and death.

The researchers, led by Dr Matthew Davey, Professor Michael Kerin and Dr Nicola Miller, from the University’s College of Medicine, Nursing and Health Sciences, conducted a multicentre trial In Ireland, involving 124 patients who were treated with chemotherapy.

The findings of the research have been published in the Journal of the American College of Surgeons (JACS).

“We discovered that patients with an increased expression of a certain type of miRNA, called miR-145, are unlikely to have a recurrence of breast cancer.

“We showed that increased expression of this biomarker, which was measured in patients' blood samples during chemotherapy, actually predicted their long-term oncological outcome. We can predict those who are likely to suffer recurrence and also those who will be free of recurrence. Further studies into the clinical application of this biomarker are ongoing.

“This study may also help identify breast cancer patients who could benefit from closer monitoring and additional therapies post-surgery or treatment.”

This research is made possible by the National Breast Cancer Research Institute and Cancer Trials Ireland.