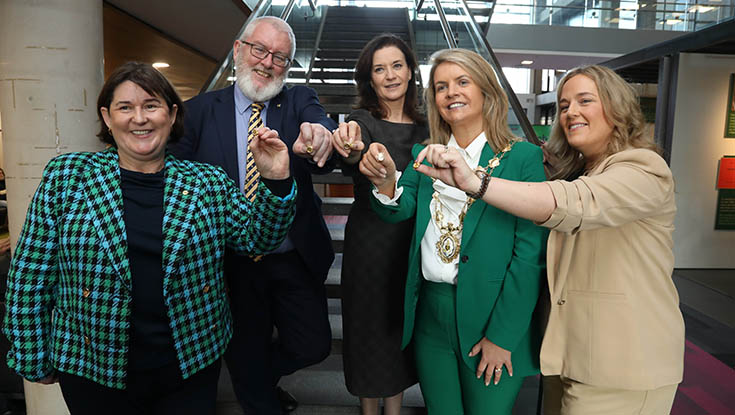 The Mayor of the City of Galway, Cllr. Clodagh Higgins launched two new initiatives by University of Galway and Gaillimh le Gaeilge to increase the use of spoken Irish in Galway city at a press event in University of Galway recently. Both initiatives are key measures outlined in the Irish Language Plan for Galway City which have an instrumental role to play in achieving the status of ‘Gaeltacht Service Town’ for Galway. Under the Gaeltacht Act 2012, Gaeltacht Service Towns are defined as those towns situated in or adjacent to Gaeltacht Language Planning Areas.

Gaillimh le Gaeilge is collaborating with Galway City Council, University of Galway and other key stakeholders to facilitate the process of implementing the Irish Language Plan in the city. The objective of the plan, in line with Government policy, is to increase on an incremental basis, the communicative use and knowledge of Irish in Galway city as a community language.  The plan includes the creation of a local directory, along with badges, to identify those who can speak Irish.

Speaking at the event, the Mayor of the City of Galway Cllr. Clodagh Higgins said: “The idea of a badge came up again in Galway City’s Irish Language Plan as a suggestion, as a way for Irish speakers to get to know each other. The brooch pins which University of Galway have designed will contribute to the visibility and use of Irish and I understand that the initiative will also be extended to Galway city, which I believe is a great idea. I’m also delighted to launch ‘An tEolaire - Seirbhís i nGaeilge’  created by Gaillimh le Gaeilge. This is a comprehensive list of businesses and organizations in the city who can provide a ‘seirbhís i nGaeilge'– a useful  resource to anyone who wishes to conduct their business as Gaeilge. An tEolaire will also include information regarding upcoming Irish language events in the city. ”

University of Galway’s Deputy President and Registrar, Professor Pól Ó Dochartaigh, said: “This latest initiative will ensure that we can improve and broaden Irish language services for the Irish speaking University community as the new brooch pins will ensure that the large amount of staff members across the University who are providing services in Irish are easily identifiable.  It is evident from international experience that making bilingual services available does not ensure that they will be acquired. The services must be publicised and must be of equal standard to the English services so as to ensure that people are at ease requesting and availing of the services and that is exactly what we are striving for here. ”

Chair of Gaillimh le Gaeilge Bernadette Mullarkey spoke at the event and said: “Launching these two initiatives today is a very natural and important step to increase the use and the position of the Irish language in Ireland’s Bilingual City. We are delighted to be working in collaboration with University of Galway on this initiative and we look forward to many other bilingual collaborations in the future. Gaining the status as a ‘Baile Seirbhíse Gaeltachta’ is one of Gaillimh le Gaeilge’s main objectives outlined in our new strategy for the next 3 years. I would encourage anyone who can provide a service as Gaeilge to let ‘everyone’ know about it by signing up with Gaillimh le Gaeilge today. It is also equally important that all Irish speakers avail of the Irish language service provided and continue to create a demand for such services into the future.”

If your business / organisation provides a service in Irish in Galway city and you wish to be listed, you can contact Gaillimh le Gaeilge on eolas@gleg.ie or on 091 568876. You can also visit - https://gleg.ie/claraigh-linn/ and fill in the short online form to register for the Eolaire.

University of Galway to showcase postgraduate opportunities at open evening