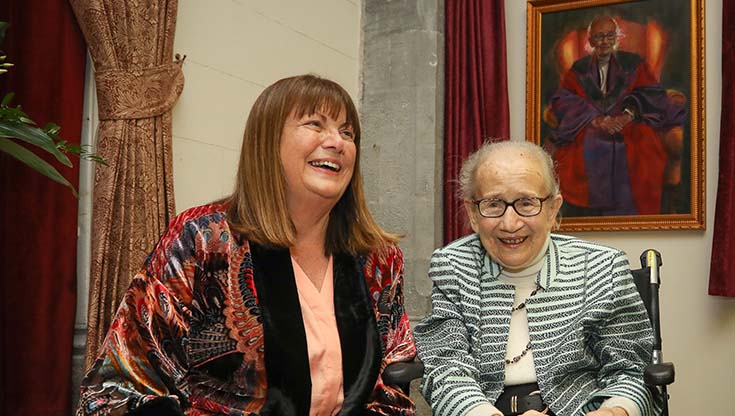 erine McGuinness and former cabinet minister and European Commissioner Máire Geoghegan-Quinn beneath a portrait of the former judge in the Aula Maxima at NUI Galway, which was specially commissioned to mark her contribution as Chairperson of Údarás na hOllscoile, the University's Governing Authority from 2013-21. Credit - Aengus McMahon

Judge Catherine McGuinness has been honoured by NUI Galway with the unveiling of a specially commissioned portrait at the University.

The retired Supreme Court judge served as Chair of Údarás na hOllscoile – the University’s Governing Authority – from her appointment in February 2013 until January 2021.

Catherine McGuinness served as Cathaoirleach of Údarás na hOllscoile for eight years and guided the University through a significant period in its development. Under her stewardship NUI Galway saw the transformation of its campuses, with the addition of many new facilities for teaching and research, significant increases in student numbers and rapid growth in the University’s research performance and profile internationally.

“This portrait captures the kindness and wisdom of Catherine McGuinness, attributes which she brought to us at NUI Galway and to her life and career. At NUI Galway our values - respect, openness, excellence and sustainability - are important to us. Our aim is that they are the lodestar for all our work as a community and for the public good. It is a privilege to have worked with someone whose life and career is the very embodiment of the essence of those values,” Professor Ó hÓgartaigh said.

“I want to thank Judge McGuinness for the steady support and invaluable insight - the kindness and wisdom - she brought to the role and the stewardship of Údarás na hOllscoile -  our Governing Authority - for many years.”

Judge McGuinness said: “It has been a huge honour to have worked with NUI Galway and to have helped in a small measure with the tremendous progress the University has made in recent years. I am also honoured to be permanently recognised with a portrait. I am grateful to all those I was fortunate enough to work with and I wish the university every success in teaching and learning, in academia and research and working for the public good.”

Dr Máire Geoghegan-Quinn, current Chairperson of Údarás na hOllscoile, NUI Galway, said: “Judge McGuinness brought a unique experience to her role as chair of Údarás na hOllscoile. She came to the Údarás after a stellar career. She was a former Senator and a lifelong activist. She served with distinction as a Judge of the Circuit, High and Supreme Courts. She was appointed as a member of the Council of State by both President Patrick Hillery and President Michael D. Higgins. She served on the Employment Equality Agency, the Forum for Peace and Reconciliation and became patron of the Irish Refugee Council.  She brought a unique breadth of experience and judgement to the role of Cathaoirleach and the University is indebted to her for the work and dedication she showed to so much of its development since 2013."

Údarás na hOllscoile, the Governing Authority of NUI Galway, is responsible for overseeing the affairs of the university and is charged with the overall governance of the University, in accordance with the Universities Act 1997. It provides active strategic direction and leadership to enable the University to succeed in its mission of education and research.