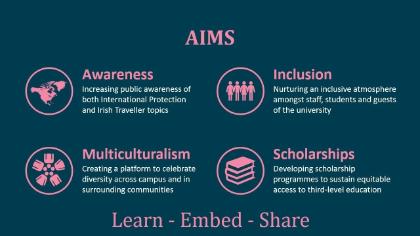 In 2017, student members of the Fáilte Refugees Society became aware of the City and University of Sanctuary movement in Ireland and the need to create a university-wide movement to challenge educational inequities that existed nationally and in the West of Ireland in particular. An initial meeting was held with the Community Knowledge Initiative (CKI), NUI Galway’s centre for civic and community engagement, and with the CKI’s full support, the students went on to form a university-wide University of Sanctuary’ Steering Committee.

At the Steering Committee’s inaugural meeting, it was decided to widen the remit of the movement to also include members of the Irish Traveller Community, who too frequently remain on the periphery of Irish society with limited access to higher education and consequent opportunities. Currently, the University of Sanctuary Steering Committee membership comprises sixty representatives from various organisations and offices (click here to meet the team).

The University of Sanctuary campaign was officially launched at NUI Galway on the 22nd February 2018 by the then newly appointed President of NUI Galway, Professor Ciarán Ó hÓgartaigh.

Since this formal launch, and with the full support of the NUI Galway President, the Steering Committee has embedded the ethos of the Places of Sanctuary across campus with the aspiration of creating an inclusive, inviting and welcoming campus for all people. The overall aim of the NUI Galway campaign is to break down the barriers for individuals regardless of their societal positioning, and offer a genuine ‘Welcome to NUI Galway’.

The NUI Galway University of Sanctuary Campaign is led by the ethos of the Places of Sanctuary Movement: Learn, Embed, and Share.

NUI Galway is primarily a place of learning, and it is a shared learning ethos which informs the actions of the University of Sanctuary Steering Committee. A number of events and activities underpin this ethos that is central to the Sanctuary movement at the University.

In addition to the shared learning approach, central to the Sanctuary ethos is to embed a culture of welcome across university life.

The University of Sanctuary Steering Committee endeavours to share its actions with the broader community; through participation at national and international events, local radio interviews, hosting of public guest speaker events, information sessions, press releases, through various social media platforms including Facebook and Twitter and, internally, through university communications.
×