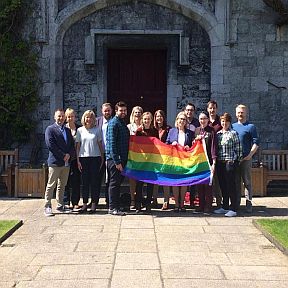 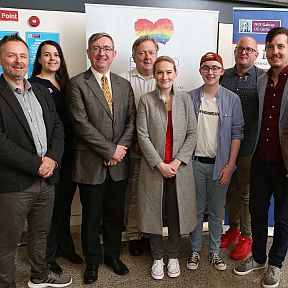 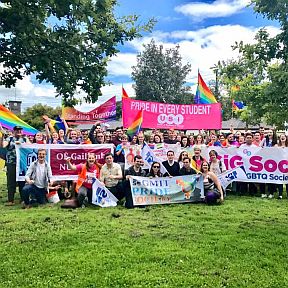 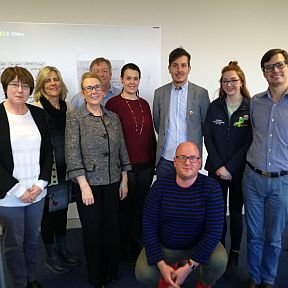 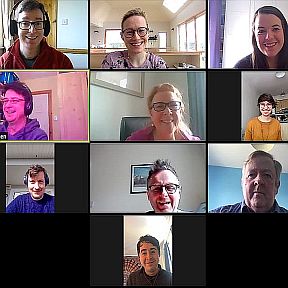 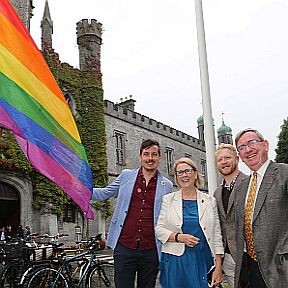 Celebrating Pride in the West of Ireland

The NUI Galway LGBT+ Staff Network has a series of upcoming events to celebrate Pride in the West of Ireland:

The Annual General Meeting (AGM) of the LGBT+ Staff Network took place immediately following the webinar, and members agreed on the work programmes to progress over the coming year.

We continue to develop our First Friday Social Meet-ups each month for our members. In Oct, Nov, and Dec 2021 we held coffee mornings both outside and virtually to begin developing our social networking following Covid restrictions, and in Feb 2022 we held our first evening pub social event for members. These First Friday monthly events will continue throughout the 2021/22 academic year.

As campus was still closed, and social engagement still impacted by Covid-19, the LGBT+ Staff Network held on online social gathering on Dec 11th, 2020 to mark the end of a difficult year. Network members were invited to join for quizzes, games, and a chance to catch-up with colleagues we hadn't seen for a while.

In Feb 2021, the LGBT+ Staff Network hosted a webinar for the university community. Dr. Mary McAuliffe, historian and gender lecturer at UCD, spoke on the theme " 'Having no use at all for men' - same sex relationships among Irish women revolutionarys and feminist activists." NUI Galway research project "Mapping LGBT+ Lives at NUI Galway", led by Dr Declan Coogan and funded by the EDI Project Fund, was presented including finding on the involvement of NUI Galway in the development of LGBT+ community supports in Galway City.

The LGBT+ Staff Network hosted an online event on Aug 11th to mark Galway Pride 2021. The event, "Conversion Therapy in Ireland: Research and Awareness", covered the current status of conversion therapy in Ireland as well as what responsibility we have within higher education and research to address this issue and work toward banning this practice in Ireland. Network members were also encouraged to attend the socially-distances flag-raising in Eyre Square.

Universities as Vehicles for Change Seminar 2019

The LGBT+ Staff Network hosted our AGM on Dec 9th 2019. The Keynote Speaker for the AGM was Ailbhe Smyth, who spoke on the theme of "Queerness on Campus - Universities as Vehicles for Change". Many in attendance learned about the role that NUI Galway played in the historical developments of LGBT+ supports within Galway City.

Following the shut-down on NUI Galway's campus, the LGBT+ Staff Network hosted a virtual coffee morning and check-in for it's membership.

Executive Members of the LGBT+ Staff Network attended the Galway Pride flag-raising to mark the start of a very different Pride season in 2020. Network members also contributed to a Galway Pride event on "Wellbeing in the Workplace" held online on August 11th, 2020.

For International Women's Day celebrations on campus, on March 4th, 2019 the LGBT+ Staff Network hosted "Queer Women in Higher Education" an open forum for discussion of the issues and challenges in the intersection of gender and sexuality.

The LGBT+ Staff Network joined groups worldwide in celebrating LGBT+ people in STEM on July 5th, 2019.  The Network held an informal coffee morning for the network and LGBT+ Allies, where LGBT+ STEM colleagues were able to discuss their research and interests.

To mark Galway Pride week 2019, the LGBT+ Staff Network joined Professor Ciarán Ó hÓgartaigh, President of NUI Galway, Professor Anne Scott, VP for Equality & Diversity, and Nuala Ward, Galway Pride Grand Marshall, to raise the Pride flag in front of the Quadrangle on 13 August 2019. The LGBT+ Staff Network then hosted a talk on the history of LGBT+ Activism and Pride in Galway by Nuala Ward in the O'Donoghue Centre followed by a reception.  All students, staff, and members of the public were invited to attend.

The Office of the Vice-President for Equality and Diversity held several networking meetings in 2017 to engage staff and get responses on what type of developments would be welcome at NUI Galway. There was good engagement and the feedback at these events led to a strategy meeting and the subsequent development of the LGBT+ Staff Network.

The LGBT+ Staff Network marked the first International LGBTSTEM day on 5 July 2018 by holding a coffee morning in the Human Biology Building, followed by an LGBT STEMinar in the Alice Perry Engineering Building. Professor Ciarán Ó hÓgartaigh, President of NUI Galway, opened the LGBT+ STEMinar which had a fantastic line-up of current staff and alumni providing insight into their personal and professional experiences.  The day ended with a table quiz fundraiser benefiting Galway Pride 2018.

To mark Galway Pride week 2018, the LGBT+ Staff Network again invited the President of NUI Galway to raise the Pride flag in front of the Quadrangle on 14 August 2018. To coincide with Pride week the Network launched the Road to Equality Exhibit in the O'Donoghue Centre. The Road to Equality exhibition showcases 40 years of activism that reshaped Ireland culminating in the introduction of marriage equality and gender recognition. This exhibition was developed by the National LGBT Federation who generously loaned it to NUI Galway.