The Health Behaviour in School-aged Children (HBSC) survey is a WHO collaborative cross-national study that monitors the health behaviours, health outcomes and social environments of school-aged children every four years. HBSC Ireland surveys school-going children aged 9-18 years. The study is conducted by the HBSC Ireland team, based at the Health Promotion Research Centre, University of Galway. 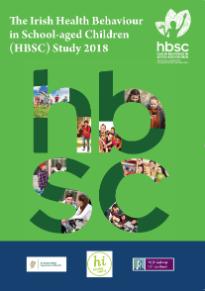 We would like to extend a big thank you to all of the children, their schools and parents for taking part in the 2018 HBSC study. Without your participation and time the study would not have been such a success. 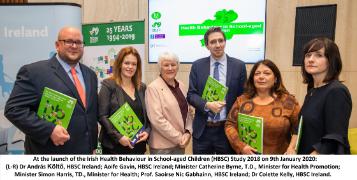 Children aged 12 to 17 years who had ever drunk alcohol were asked where they sourced and consumed alcohol. The most common reported source of alcohol is a parent or guardian and the most common location for consumption is in someone else’s home.

On the WHO-Five Well-Being Index 15 to 17 year olds scored 50.54 (scale 0–100: 0 means a total lack of wellbeing, while 100 means that high levels of wellbeing were present all of the time during the last two weeks).

Findings from HBSC Ireland 2018 will be distributed in reports, journal articles, factsheets and presentations to various interest groups. A full list of publications and articles etc. can be found on the publications page.

This report includes all variables included in the 2018 study, and provides details for every response option by age, gender, and social class and their interactions. The outputs are presented by section below: 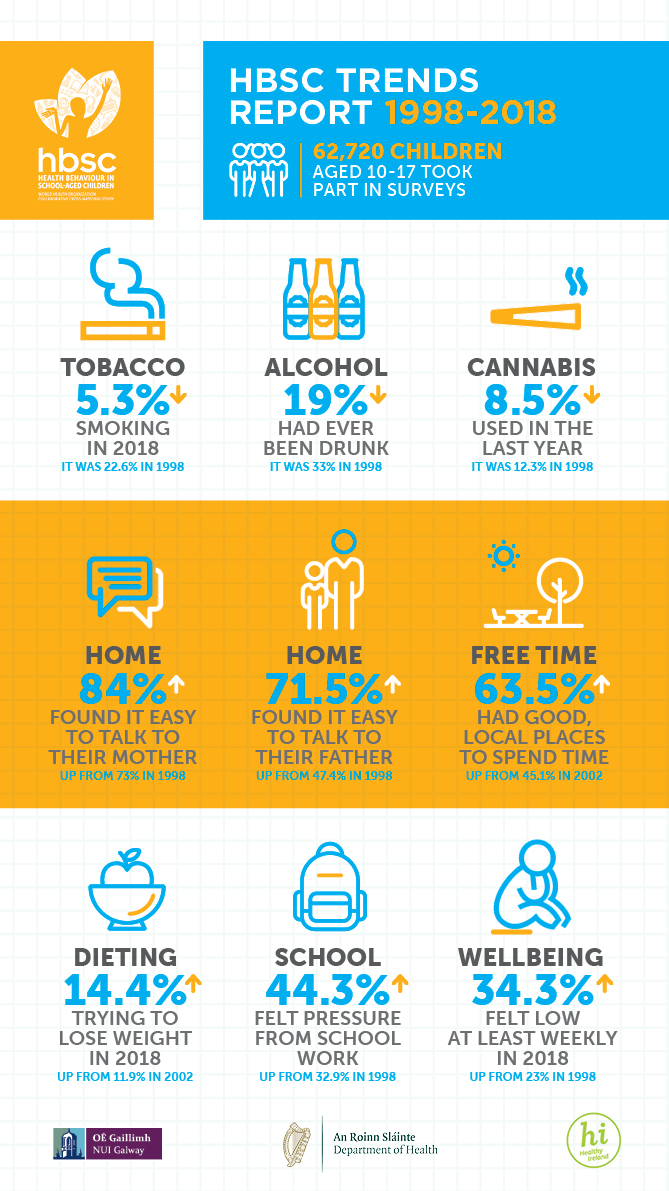 Trends in Health Behaviours, Health Outcomes and Contextual Factors between 1998-2018. 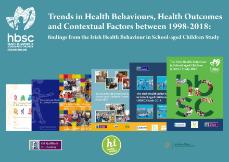 The HBSC Ireland report Trends in Health Behaviours, Health Outcomes and Contextual Factors between 1998-2018: findings from the Irish Health Behaviour in School-aged Children Study was launched on 8th March 2021 by Frank Feighan, Minister of State with responsibility for Public Health, Wellbeing and National Drugs Strategy.

The report explores the trends in the health and wellbeing of children in Ireland between 1998 and 2018. To date, HBSC Ireland has collected data from 62,720 school-aged children aged 10-17 years across the Republic of Ireland. The report describes the self-reported health status of children in Ireland over time in relation to key indicators: health behaviours, health outcomes and the contexts of their lives. Internationally comparable trends data are also included.

The HBSC international report from the 2017/2018 survey is now available. The Spotlight on Adolescent Health and Well-being provides data from 45 countries in Europe and Canada. Findings are presented on the health and social behaviours of almost 228,000 young people aged 11, 13 and 15 years.

The cross-national survey covers diverse aspects of adolescent health and social behaviour, including self-assessment of mental health; body image; dietary habits; physical activity; school context; relationships with families and peers; tobacco, alcohol and cannabis use; bullying and injuries; and sexual health (for those aged 15 and above only). A special focus on online communication was included in the most recent HBSC survey, to better understand the expanding role of digital technology in young people’s lives.

The study highlights the changing status of mental well-being among the Region’s youth. Reports of poor mental health – feeling low, nervous or irritable – are increasing across the Region. The data also clearly show that mental health declines with age. While technology can have positive benefits, it can also introduce new threats, such as cyberbullying, which disproportionately affects girls. Over 1 in 10 adolescents report having been cyberbullied at least once in the past two months.

As the latest HBSC study, featuring findings from 2017/2018, is released, the world is grappling with the COVID-19 pandemic. The next study, which will feature findings from 2021/2022, will therefore reflect the impact of the pandemic on the lives of young people.

Further information can be found on the WHO/Europe website

To access both Volume 1 Key Findings and Volume 2 Key Data of Spotlight on Adolescent Health and Well-Being, visit: http://www.euro.who.int/en/health-topics/Life-stages/child-and-adolescent-health/health-behaviour-in-school-aged-children-hbsc/hbsc-2020

‌We are delighted to announce that a special issue of the Journal of Adolescent Health has been published to accompany the launch of the International HBSC report. This includes ten scientific journal articles and three commentaries, which are the first international publications from the 2018 datasets. You can find the special issue at https://www.jahonline.org/issue/S1054-139X(20)X0013-9.

In addition to the national and international reports HBSC Ireland 2018 data has been used in the following government and other health organisations reports:

State of the Nation's Children: Ireland 2020

Published by the Department of Children, Equality, Disability, Integration and Youth the State of the Nation's Children report is now available as a web version. HBSC Ireland is a main data source for this report which provides the most up-to-date data on the National Set of Child Wellbeing indicators, and:

‌Family Carers Ireland have published an new report briefing which sets out key findings relating to young carers' health and wellbeing, social enviroments and health behaviours. The report draws on findings from the HSBC Ireland 2018 study,

HBSC Ireland data fetures in a new report published by the Institute of Public Health and NUI Galway’s Health Promotion Research Centre on sunburn, sun smart behaviours and sunbed use by children.

This report was developed to inform implementation of the National Skin Cancer Prevention Plan 2019-2022.

Data is presented principally from the 2018 Health Behaviours in School-Aged Children (HBSC) Survey, which reports health behaviours for those aged 10 to 17-years-old. The total sample size was 10,271.

Some of the key findings of the report include:

See https://publichealth.ie/uvreport/ for more information, including a link to a recording of the launch webinar.

Minister for Children and Youth Affairs, Dr Katherine Zappone, published thei Statstical Spotlight #4 Young Travellers in Ireland  report by the Department of Children and Youth Affairs.  HBSC Ireland data fetures in the report which focuses on children and young persons who are members of the Traveller community, on topics such as health, housing, education and economic status. The Spotlight also contains a small amount of information on young Roma.

It contains data on a number of areas including: